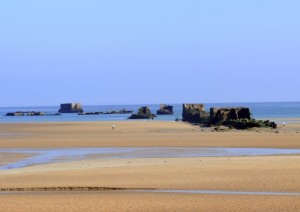 As the large French harbours had been heavily fortified against seaborne assault by the German Forces, the Allies realised that they had little chance of capturing a port on the first day of their invasion of occupied Europe. However, without an intact deep-water port the Allies would be unable to supply the troops needed to defeat the German Army in Occupied Europe. Even if all of the myriad of smaller fishing ports within the invasion area were used, the Allies would simply be unable to land sufficient tonnage of supplies to keep their invasion forces ahead of the Germans.

To solve this quandry the idea of artificial floating harbours was developed. These ports could be constructed in safety in England, the individual pieces towed across the channel to the coast of France and quickly assembled there. Two of these harbours, codenamed Mulberry, were built. Mulberry A was to be set up on Omaha Beach with it’s sister, Mulberry B, to be set up on Gold Beach. These harbours would greatly assist the Allies in unloading as large as possible a quantity of supplies as quickly as could be managed. This would provide the support needed for the advancing Allied Armies and while limiting the risks associated with unloading materials on the beaches.
Although both of these artificial Mulberry Harbours were set up and running within 12 days of the Landings starting, a huge storm destroyed Mulberry A and very badly damaged Mulberry B before the end of June. With Cherbourg near to being captured it was decided to repair only one of the harbours with Mulberry B becoming the main Allied supply port until Cherbourg was cleared in mid August 1944.