Juno Beach was one of five designated beaches that were used during the D-Day landings in June 1944. The landings at Juno Beach were to prove militarily successful but costly in terms of men lost.

Juno Beach was six miles wide and the Germans had fortified the area immediately behind the beach. However, both naval and aerial bombardment should have neutralised these fortifications.

Many Canadian soldiers had to wade ashore. They were not fired at by the Germans as the defenders had set-up their guns to fire at a killing-zone of the beaches – and not out to sea. However, when the Canadians reached the beaches of Juno, they were hit by a powerful wave of firepower. In particular, the first wave of men on the beaches took heavy casualties. It is now estimated that in the first assaults, each Canadian soldier had a 50/50 chance of survival, such was the potency of the German gunfire.

Once the attacking soldiers had reached the German positions just behind the beach, they were able to move inland with some speed. Troops from the 1st Hussar Tank Regiment reached the Caen-Bayeaux road and were the only part of the whole June 6th invasion to actually reach their designated target by the end of the day.

The Canadians had to fight hard for Juno Beach. Of the 21,400 men landed on the beach on June 6th, 1,200 men were casualties. However, once they had moved inland, the paucity of the German defences showed themselves. 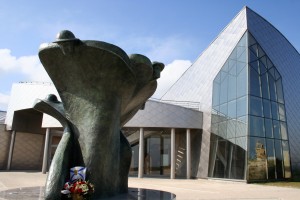